Your Ultimate Guide To Mason Jars 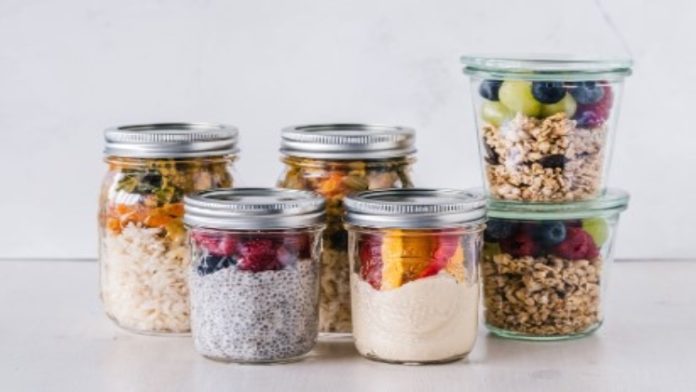 Put your fruits and vegetables up in style with these simple glass jars, made specifically for canning back when refrigeration wasn’t a thing. Mason jars are the most modern and ancient multipurpose container. Although mason jars were originally designed for use in the kitchen, their popularity has since expanded to include other uses.

Mason jars, with their winning combination of adorable and functional, have been shown to be useful in every area of the home.

Canning foods like dill pickles and blackberry compote utilizes a method that has been around for over 160 years. In that case, let’s take a quick look into their true nature, their storied past, and more!

There is a specific type of glass jar called a Mason jar that is commonly used in home canning to store food for later consumption. John Landis Mason, an American tinsmith, patented it in 1858, hence the name. There is a screw thread around the rim of the jar’s mouth so that a metal ring, or “band,” can be attached.

When the band is tightened, it presses a separate, disc-shaped lid made of stamped steel on the lip of the jar.

When Mason’s patent expired, many new companies began producing identical design mason jars. Many Ball and Kerr brand jars feature the word “Mason” since the brand name Mason has become the genericized trademark for that form of glass home canning jar throughout the years.

Even if a certain company doesn’t make the specific jar in question, its design is often referred to by a well-known brand name, such as a “Ball jar” in the East or a “Kerr jar” in the West.

Nicolas Appert, a French chef, is credited with developing the technique of vacuum sealing food for long-term storage. Wax sealers were among the earliest glass jars used for home canning. This is because sealing wax was poured into a channel around the lip of the jar to secure a tin top.

Although time-consuming and prone to mistakes, this method of sealing fruit jars rose to prominence in the 1830s and 1840s and remained in use until the early 1900s. Before additional sealing technologies were invented that are now used in modern laboratories, such as those where medical plastic manufacturers work, wax sealing was the sole option.

Mason jars have been around since 1857 when the first one was patented, and there have been hundreds of different changes in its form and cap design over the years. Following the expiration of Mason’s patent, a slew of other companies began making imitation Mason jars for home canning.

Modifications To The Layout

The original Mason jar design was prone to breaks due to the stress at the sealing point. Therefore, variations were developed, such as the “Improved Mason”.

Mason created a new “bead” jar style between 1910 and 1915. These containers with continuous screw threads have a sealing bead between the threads and the shoulder.

One of the most popular jars of this type is the Ball Corporation’s “Perfect Mason,” which was first launched around 1913 and remained in production until the middle of the twentieth century. Among its many iterations was a square jar.

Glass jars, flat, self-sealing lids, and metal bands are the components that make up a mason jar.

The openings on the jars are either 3 inches or 2.5 inches in diameter. They come in sizes ranging from 4 ounces to 1 gallon. Canned goods should not be stored in containers greater than half a gallon.

Canning jars typically come in quart, pint, and half-pint sizes. Many jars feature an embossed logo, although others have decorative patterns or are plain and smooth. If the jar is not shattered, it can be cleaned and used again. For this, it is important to make sure that the jars are securely placed in a rigid box by an experienced rigid box maker.

Sealing compound on metal lids creates a gasket that seals the lid to the jar’s rim. It’s important to throw away any lids that haven’t been used in the past five years because the sealing compound inside them has expired. Do not reuse caps.

During preparation, the air is expelled from the jar, resulting in a reduction in food volume. As the jar cools, a vacuum is generated, sucking the dome downward. Lids and seals on processed jars should not break down while they are being stored.

Metal screw bands are used to properly position and secure the lids on the jars. They can be reused if they are still in good condition and free of rust after processing.

A renaissance of mason jars has occurred in the twenty-first century, though not always for their original function. Mason jars are now commonly utilized as drinking vessels, flower vases, and utensil holders in the rising trend of “farmhouse chic” establishments.

They can also be seen in weddings held in barns, and kitchens decorated in a rustic, country style.

Due to the recent Covid-19 outbreak, mason jars are again being used for their intended purpose. Compared to this time last year, there has been a whopping 2,000% increase in searches for “canning recipes” and related terms on Google.