Movie Review: Start The Revolution Without Me 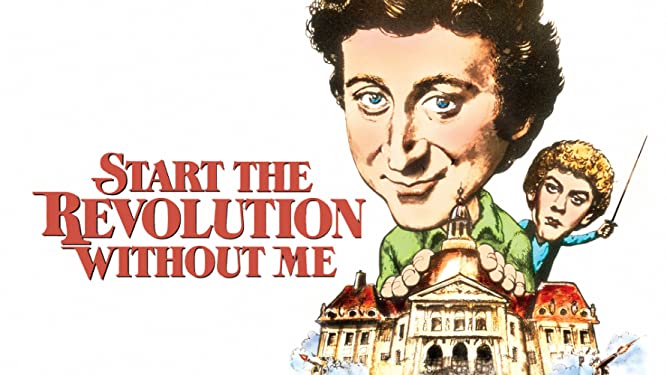 Watch Start The Revolution Without Me (NorBud Productions, Warner Bros. Pictures, 1970) for its comedy, not for its history. You can stream it for free at 123 Movies.

Comically “hosted” by Orson Welles, the opening scenes provide a succinct summary of the main cause of the French Revolution: differences between peasants and aristocrats. Welles at first seriously explains the situation, but the film and his voice quickly spiral, literally (the film speeds up and his voice rises several octaves) out of control into nonsense, setting the tone of the movie: a slightly altered view of history explained with wacky humor.

A few frames later the film resumes: a peasant woman and an aristocrat woman, both about to give birth, arrive at a doctor’s office. Both give birth to twins. The doctor’s assistants get confused and switch one peasant baby with one aristocrat baby. As explained by Welles earlier, this switch will affect the development and outcome of the French Revolution.

The scene ends and the next begins with Welles’ voice narrating and then ending, again, with his voice sped up into Alvin-and-the-Chipmunks range. He describes the lifestyle of the twins — the aristocrats Philippe and Pierre de Sisi, and the peasants Claude and Charles Coupe, both played by Donald Sutherland and Gene Wilder — in their adulthood as they attempt to maneuver their way through the France of King Louis XVI.

Running Gags in Start the Revolution Without Me

History is vaguely referred to: the King is wishy-washy and not always on top of things; Marie Antoinette is haughty and sneaky; the peasants are unhappy and planning a revolt.

Humor has the starring role. Among the running gags are: The Man In the Iron Mask (a character from a novel by Alexander Dumas) making repeat appearances; the arguments between Gene Wilder’s Philippe and his wife about how to spend their private time together; Donald Sutherland’s Charles (who is most likely the aristocrat baby moved to the peasant family) refusing to engage in hard labor or uncomfortable situations with his peasant brother; the inept King Louis XVI trying to communicate successfully with his own wife; the peasant brunette Mimi stalking a young beautiful blond girl she believes to be her sister; and the complicated, tongue-twisting, double entendres from the start of the movie to its end, particularly the “pleasure versus business” exchange at the costume ball.

The Conclusion to Start the Revolution Without Me

Just as an explanation about the twins is imminent, the movie turns wacky again, suddenly changing from eighteenth-century France into a pseudo-James Bond moment. Since the movie changes its atmosphere frequently, this is not surprising. Director Bud Yorkin and screenwriters Fred Freeman and Lawrence J. Cohen are probably highlighting the absurdity in daily life, as opposed to providing a serious presentation of French history.

Principal Actors In Start the Revolution Without Me

One Way to Learn About French Revolution

Start the Revolution Without Me is more of a parody than an historically accurate story, but may be one way to learn “just the basics” about the French Revolution.