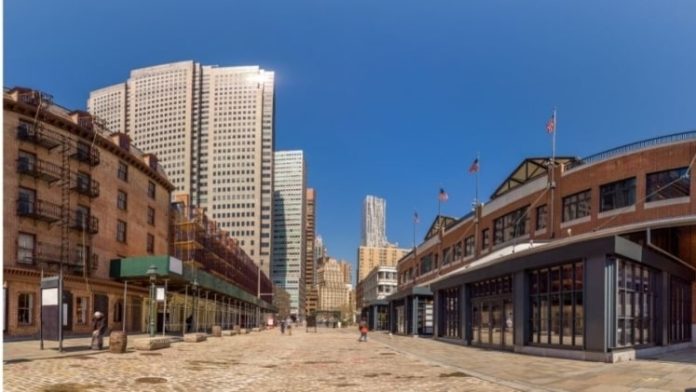 If you are familiar with the City of New York, you know there is a Fulton Street on the Lower East Side of Manhattan and directly across the East River in Brooklyn, there is also a Fulton Street. This is not a coincidence. The Brooklyn street was once called Ferry Street. In the days before the Brooklyn Bridge was built, to cross the river between Brooklyn and Manhattan required traveling by ferry. The street where the pier was located thus took on the name Ferry. The invention of the steamboat changed that.

Fulton Street is a long thoroughfare in the Brooklyn Heights neighborhood with many businesses. For example, the gym chain, Blink Fitness has a location at 1134 Fulton St. The man for whom both this street and the one in Manhattan was named, Robert Fulton, was an engineering genius and inventor. Fulton designed the world’s first practical submarine, the Nautilus, for Napolean Bonaparte in 1800. He also designed some of the earliest forms of torpedos for the British Royal Navy. What Fulton is best known for, is the invention of the steamboat.

Robert Fulton became fascinated by the concept of steam engines at the age of 12. He learned about the steam engine built by British inventor, James Watt, from a local Pennsylvania representative named William Henry. Henry met Watt on a trip to England and detailed all he had learned to the young Fulton. His interest would grow and lead him to his most famous achievement.

In 1807, Fulton built the world’s first successful steamboat, originally called The North River Steamboat, and later changed to the Clermont. The vessel made the 300-mile roundtrip journey between New York and Albany in 62 hours. For the early 19th Century, this was an impressive feat. The Clermont operated as a transport between the two cities, carrying passengers and freight from one to the other. The boat was a commercial success, turning a tidy profit for Fulton and his investors. By the time of Fulton’s death in 1815, he had constructed a fleet of 17 steamboats with an additional six under construction at local shipyards.

The Ferry Across the East River

Brooklyn and Manhattan were separate cities at the time and people and freight were moved between the two daily. The building of the first East River crossing, the iconic Brooklyn Bridge would not happen until the later part of the century, so wind-powered ferries were used. As winds are unpredictable and unreliable, a better method of crossing was sought. Fulton’s steamboats provided an excellent solution. Steam-powered ferries began carrying people and goods across the river between the two locales. In honor of the brilliant inventor who created the ships that made it possible. both Brooklyn and Manhattan named the streets the piers were located on, Fulton Street.

In major cities, one of the greatest tributes that can be paid to noteworthy people is to name a street after them. Robert Fulton earned this honor doubly with two streets in two different boroughs of New York bearing his name.